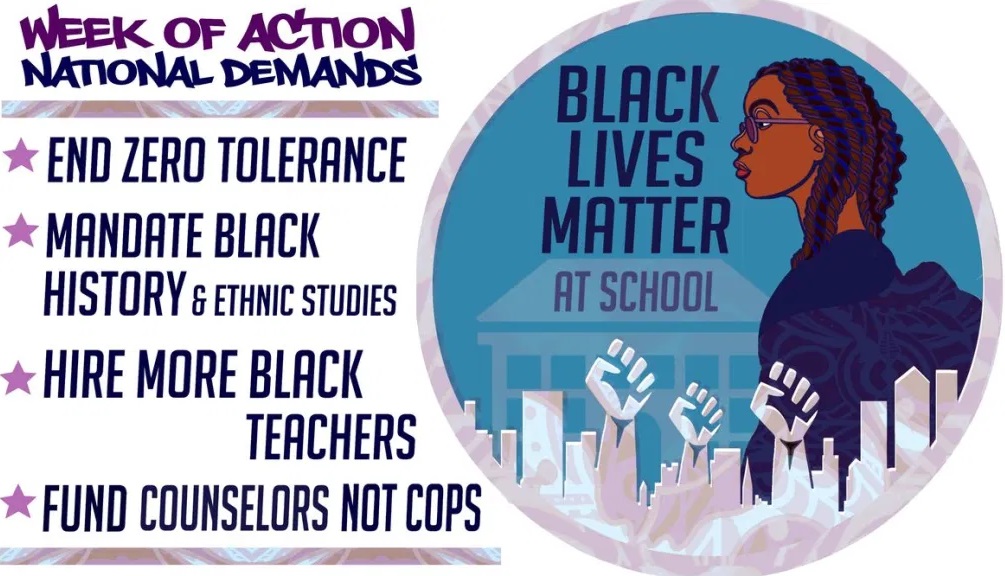 Trigger Warning: this article includes descriptions of incidents in which racist language is used.

In a student-lead briefing on Monday, Jan. 25 on Zoom, educators, parents, youth in the NAACP Youth Coalition, and members of the press convened to kick off the Black Lives Matter (BLM) at School Week of Action in Seattle. Now a national movement four years running, it all began here in the South End in 2016 when John Muir Elementary School (JMES) had to temporarily cancel plans for an assembly meant to bolster the morale of Black students. After word spread via Breitbart News Network that teachers at the district-sponsored event would be wearing Black Lives Matter t-shirts, organizers received hate mail and a bomb threat, causing them to temporarily cancel the assembly. Then, in an impressive display of Seattle solidarity with JMES, over 3,000 educators district-wide showed up to work donning “Black Lives Matter” shirts, and a movement was born.

While some may think that the hatred that spurred the BLM at School Week of Action was an isolated or remote occurrence here in the Emerald City, Garfield educator Jesse Hagopian was quick to dispel that illusion early on in the press briefing. “It really shouldn’t surprise people that this movement started in Seattle, because there is a vicious anti-blackness and racism in our city, that’s attacking black students’ minds and it’s attacking their bodies,” Hagopian said. The youth present could also attest.

The majority of the speaking time at the press conference was filled with the words of high school students, clearly unprompted but fully capable of conveying the direct impacts of systemic and interpersonal racism — as well as contributing to the dismantling and diminishment of both, respectively. Ida Girmai, who goes to Ingraham High School, recalled an infuriating example from her elementary days, where she was frequently bullied because of her hair and told that she “looked like a monkey.” When she finally decided to stand up for herself, she was sent to the office and told she was the bully.

Girmai, who wants to make sure her younger brother never has to go through what she did, says, “This is how they silence us. They want us to speak up, and the minute we do, they will turn the table to make it seem like we’re the problem.” Angelina Riley, a student at Rainier Beach High School and 2020 Black Education Matters Student Activist Award Winner for her work organizing to get police out of Seattle Public Schools, recalled a story that still traumatizes her. “In fifth grade, we had a teacher push a Black student down the stairs, just because this Black student was having a good day and that teacher was having a bad one. He was not fired for it. He was merely suspended and was paid during his suspension.”

Chiwetalu Ekwueme, who goes to school in Edmonds and has already become a remarkably effective public speaker and advocate, discussed a passive lack of accountability for interpersonal racist incidents that she remembers occurring within the school buildings she attended. “If you were caught bullying, there were steps, there was punishments, there were things that would happen if you bullied somebody, or if you reported yourself getting bullied. But when it comes to the N-word or any discriminatory actions … racist actions, nothing … until the youth stepped up and made something happen.”

Tracy Castro-Gill, founder of the educational nonprofit Washington Ethnic Studies Now (WAESN) and the former Ethnic Studies Program Manager for Seattle Public Schools, spoke about how Black educators who speak up are routinely treated in a similarly caustic fashion. Jackie Flaherty — a career changer with previous experience as a journalist and the only Black teacher at View Ridge Elementary in northeast Seattle — was the courageous whistleblower who finally brought a halt to the school’s practice of locking an eight-year-old child, Jaleel, who is Black, inside a small, fenced-in area dubbed “the cage” — where he sometimes ate his lunches on the floor in full view of other students. Castro-Gill said, “She [Jackie Flaherty] held onto that story and sat on it for two years, because she was being retaliated against and was afraid of coming forward. She was afraid of losing her job. She’s a veteran educator, a Black woman, and she is not the exception. She is the rule.” Erin Herda, a principal intern and ethnic studies teacher in the Tukwila School District, who spoke later on, added, “I think that as a white educator, we have to take those risks that our privilege grants us, to push for these initiatives in our schools, because retaliation will be less.”

Sebrina Burr, Seattle Council PTSA Strategic Advisor, referred to five other families at View Ridge Elementary with serious complaints. “When you find one story, you need to look at the culture of the school … One student being abused is one student too many, and we have to look at the whole system.” Emija Smith, a parent and organizer, picked up where Burr left off, saying, “The school culture is a reflection of the district’s culture” and added that for it to better serve Black families, “You have to check back in with those families. You have to engage with those Black families … The children, the students, the families have already spoken: it’s not working for us.”

Besides mentioning the thirteen guiding principles and the four national BLM at School movement demands, two local demands were announced, namely: fully funding education and ending high-stakes testing. Rena Mateja Walker Burr, a junior at Garfield High, who seamlessly hosted the press conference, also spoke about the need for Black studies and ethnic studies to be integrated K–12 curriculum, insisting that teachers need to “teach the truth” about Black people and their history, instead of just “all of the horrible things that we went through.” Other featured speakers during the hour-long event were Gerald Hankerson, president of the NAACP’s Alaska Oregon Washington State-Area Conference, and Brandon Hersey, the Seattle Public Schools District Seven School Board Director. You can watch the entire press conference here.

Monday, Feb. 1: An elementary read-aloud event is in the works for students to learn about important African American figures that are often overlooked (more info TBD).